The loving kindness of a group of colleagues helps a man to take more than a year off to take care of his son who was diagnosed with leukemia. They have donated nearly 3,300 hours of overtime so he could be by his son’s bedside as he fought leukemia after the boy’s mom’s sudden death!

36 year old Andreas Graf, who works as an assembly worker with a design company at Marburg, had taken all of his annual leave after his son was diagnosed with leukemia. Little Julius was just 3 years old when he was diagnosed with the decease and the dad has to avail all his leave to be with his son who was in hospital bed for the first 9 weeks. Graf was struggling to cop up with his son’s illness soon after the death of his wife!

Knowing the pathetic situation of this employee, company’s HR manager Pia Meier stepped in to help Graf by saving his job. He was afraid of losing his job until the HR manager decided to send out an appeal to Mr Graf’s employees to donate their overtime.All of the company’s 650 workers immediately signed up the appeal which was circulated by the HR manager. Within two weeks they could raise a total of 3264.5 hours of work time for Mr Graf and helped him to avail the required leaves!

By the grace of God, Julius is now feeling well after the chemotherapy treatments and will be soon released from the hospital. The boy who turned 5 at the end of February is hoping to return to nursery school soon.

“Without this tremendous help, I would’ve been out of my job by now”. Graf was in tears while expressing his gratitude towards his caring colleagues and company he works with!

Seeing such genuine gestures of love will give much hope and happiness to face our tomorrows! Mitchell Greathouse has spastic quadriplegic cerebral palsy since he was just a baby. But that never stopped him from... A young boy with autism got the surprise of his life when a football team turned up to wish him on his birthday... This 7 second video of a 2-year-old boy named Roman Dinkel has inspired millions across the internet. Roman was... Compassionate Firefighters Nurses An Exhausted Hummingbird Back to Health

Firefighters are known to be fighters and are hailed for their service to the nation, but underneath their tough... 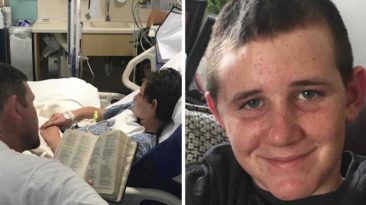 A young boy became proof that miracles do happen in this age and time when he had a close encounter with death. The 14... A dying women’s wish to see the ocean one last time was fulfilled by a ambulance crew who took a small diversion to the...