7-year-old Athena Strand went missing on 30th of Nov from her dad’s home in Texas. Her lifeless body was found later on the 2nd of Dec, few miles away from the house. Her death has shocked and rocked the residents of Wise County and the entire nation. 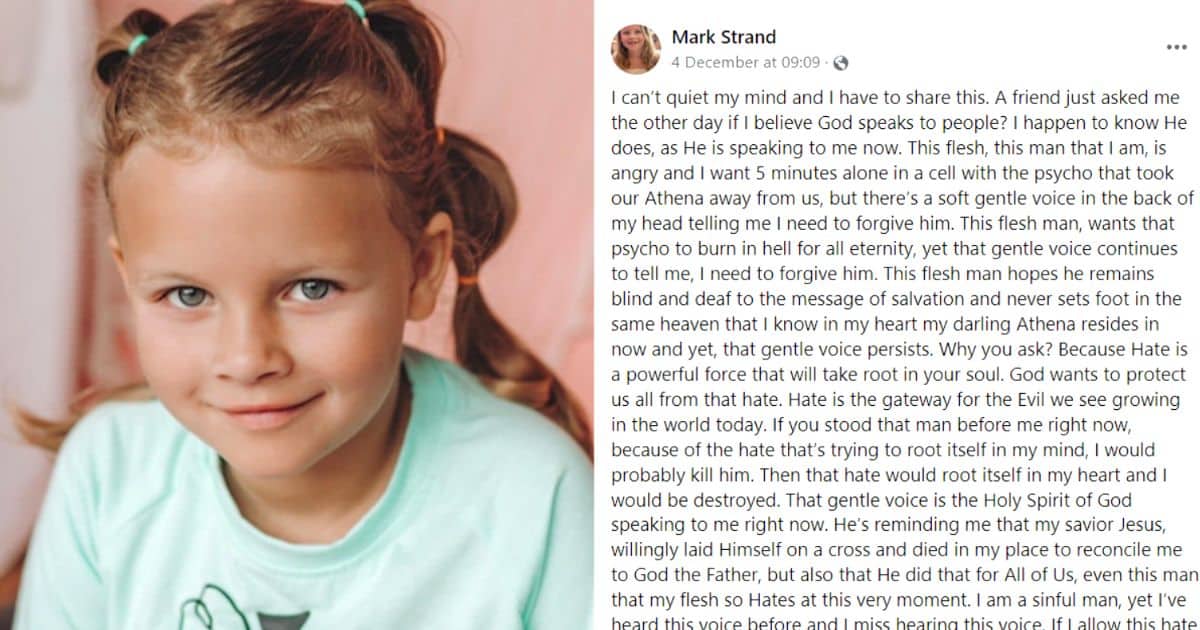 The police are describing the unfortunate death of the young girl as a ‘crime of opportunity’. Thirty years old FedEx driver, Tanner Horner has been arrested for the crime and he confessed to have taken the life of the girl within an hour of her abduction and dumped her body.

The loss of the precious young girl has gutted the entire nation, more so Athena’s family. Even more heartbroken was Athena’s grandfather, Mark Strand, who confessed that he would likely kill the man if he were any closer to him as the great hate and rage he felt inside as a man for the killer would overpower him.

However, he says that the still small voice of the Holy Spirit is speaking to him to let go of the hate and forgive the man, for the sake of his own and his family’s peace. He wrote a heart wrenching post on Facebook, pouring out his rage and grief over his grand daughter’s death. And publicly forgives the man who killed her.

Mark wrote that the man that he is [flesh and blood] wants that psycho to burn in hell for all eternity, yet the gentle voice continues to tell him that he need to forgive him.

“That gentle voice is the Holy Spirit of God speaking to me right now. He’s reminding me that my savior Jesus, willingly laid Himself on a cross and died in my place to reconcile me to God the Father, but also that He did that for All of Us, even this man that my flesh so Hates at this very moment.”

He continued, “There’s not one ounce of my flesh that wants to do this or say this, but my spirit has heard God’s voice and right now, while tears flood my eyes, I declare publicly that I forgive this man! Hate will not win. I hope my family will understand that I don’t do this for the sake of this man. I do this for the sake of my family and myself and to Honor the voice of God who is giving me the strength to say this. I do this to honor our precious Athena who knew no hate.” 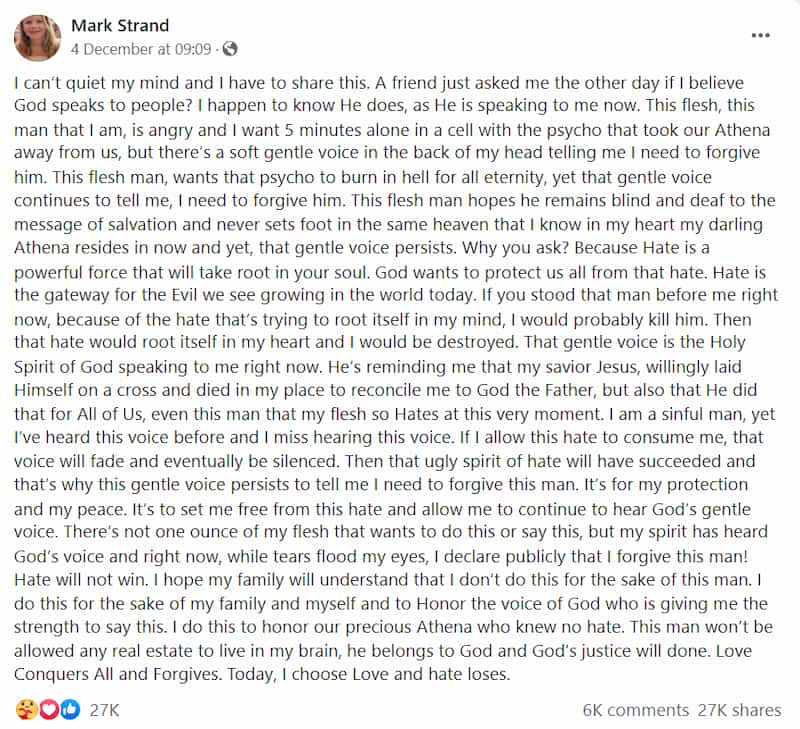 As family and friends continues to mourn the loss of Athena Strand. Let us continue to pray for the family.

God bless this family in this horrible time. God speaks to us all, it is for us to listen and obey. Little Athena is in a much better place. One day we will all see our loved ones once again. There will be no more tears, no more sickness. Only Peace with our heavenly Father.

Wow, Mr. Strand has just written one of the most powerful, soul searching, saving statements I have ever witnessed. In your terrible agony, you have shown what true Christianity is all about. Jesus is beeming with delight at your attitude, and so saddened by your loss. But, as it already is for Athena, Heaven will be your reward; and for now, may peace be your friend, through our savior, Jesus Christ.