Children love to write letters to Santa asking him for their favorite toys, but the letter this 7-year-old boy living in a domestic violence shelter wrote, is breaking hearts everywhere in the country. 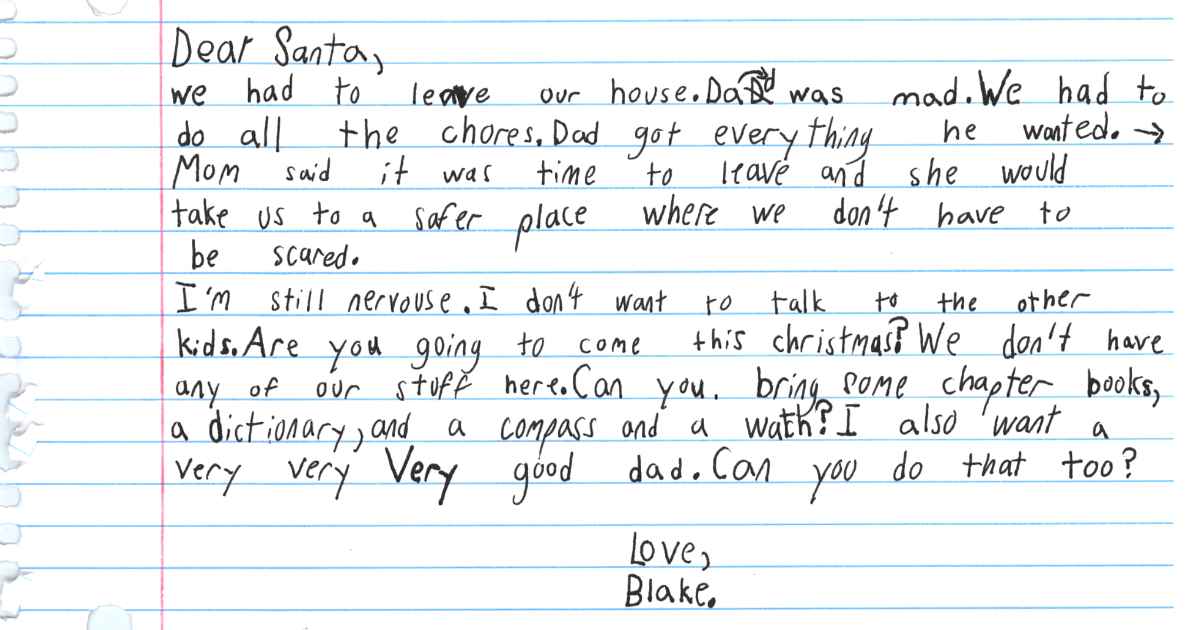 Blake wrote the letter straight from his heart to Santa Claus earlier this week, and he never imagined that his letter would be read by thousands of people in the country.

His mom saw the letter in his backpack, and it was so emotional that it was shared online by the domestic violence shelter on their Facebook page.

Blake wrote, “Dear Santa, we had to leave our house. Dad was mad. We had to do all the chores. Dad get everything he wanted. Mom said it was time to leave and she would take us to a safer place where we don’t have to be scared. I’m still nervous. I don’t want to talk to the other kids. Are you going to come this Christmas? We don’t have any of our stuff here. Can you bring some chapter books, a dictionary, and a compass and a watch? I also want a very very very good dad. Can you do that too? Love, Blake.”

The letter went viral on social media and “We never anticipated it would get the kind of attention that it has gotten,” Kathryn Jacob, the president and CEO of the non-profit shelter SafeHaven said.

After the letter got posted, the shelter has been receiving a flood of holiday presents for kids staying at the shelter and everything Blake asked for!

Blake is a 7-year-old boy in one of our shelters, and his mom found this letter to Santa in his backpack a few weeks…

Posted by SafeHaven of Tarrant County on Wednesday, December 18, 2019

Jacob said there are many kids with similar situations at their shelter, which serves Tarrant County in the area of Dallas and Fort Worth, Texas. “To us, it was kind of a story that we’ve heard all the time,” she said. “Like tonight, we have 73 kids in the shelter. So Blake is just one of many.”

But what was striking for Jacob was the the numerous comments from women who have been victims of domestic violence on the post about Blake’s letter. “One in three women in Texas will experience domestic violence in their lifetime,” she explained. “Even though we inherently know that, what has been remarkable to us is the number of women commenting on those stories saying they can relate.”

Jacob added that Blake and his mom arrived at the shelter around Thanksgiving and would stay there through the holidays and that the mother-son duo were not in any danger because of them being in the spotlight due to the letter.

“We would never compromise that through a social media post or otherwise,” SafeHaven wrote on Facebook. “Blake and his mom are safe! Thank you for your concern for his family.”

Little Blake and the numerous other kids at the shelter deserve to have a safe and beautiful home with loving parents by their side, we pray to the good Lord to grant them all their hearts desires this Christmas and may their lives be transformed completely.