A police officer is being praised online for showing kindness towards an elderly man in hospital. A story shared by Georgia Law Enforcement, it says that the police officer met Bob two years ago while being on duty. 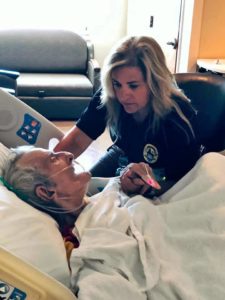 The post further said, “Lawrenceville Police Officer Dena Walker Pauly’s life was changed forever when she was dispatched to a local pawn shop, where staff were unsure how to help him.

Bob has been on his own since childhood with no known family and homeless till he met with an incident which left him non-verbal. Officer Pauly came to the pawn shop and could not understand how to help Bob because of his condition, so she suggested she take him home and he show her what he needed.

When she arrived at his home, she was appalled at his living conditions, she started addressing his deplorable living conditions and taught him basic things like throwing garbage in the trash can rather than the floor. She even made arrangements for his food and also cleans his small apartment.

She also sought and received a Power of Attorney for Bob’s medical care, and he has been in the hospital since May. It was an important day for Bob and Dena when she had to start hospice care for Bob, so she held his hand and told him many times that she loved him, probably the first to ever say that to him. 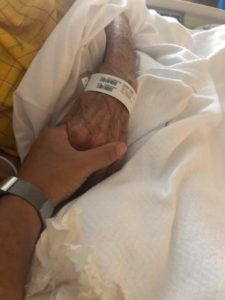 On July 17, Georgia Law Enforcement made a sad announcement, “It is with a very heavy heart that we have to report that Bob passed away earlier today. While the end of one’s life is always sad, it is the love and compassion that he received from Officer Pauly that gives us a smile knowing he is now in a much better place.”

<<<UPDATE: It is with a very heavy heart that we have to report that Bob passed away earlier today. While the end of…

Even though Bob had a hard and difficult life, God provided an angel in the form of Officer Pauly to take care of him in the twilight years of his life.

Aloha from Hawaii.
What a heartwarming story!
Office Paulo, you were a godsend to that lonely, old man.

God bless you for your compassionate heart!!

GOD BLESS THIS LADY AND THIS MAN. People care, help others in time of need. Thank you God for letting this happen. 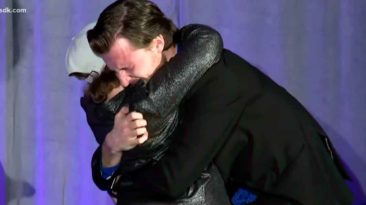 It was an emotional meeting between a young girl and the man who donated his bone marrow to her and saved her life. It... It is said that No act of kindness, no matter how small, is ever wasted. The kindness that Dakota “Bubba”... Emotional Reunion Of Chimpanzees And a Woman Who Saved Them 25-Years Ago!

Chimps reunites with the woman, Linda Koebner who rescued them from the cages of a research lab 25-years before. For... Rich Cushworth and his wife Mercedes were eagerly waiting for their baby’s arrival. After the baby was handed... 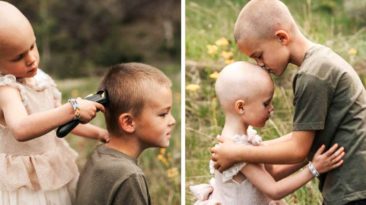 With the ongoing COVID-19 pandemic, Kristin and Dakota Bowden of Texas experienced another struggle when in early March... Attending their child’s graduation ceremony, is a proud moment for any parent, just like their first steps, first...

The person without the Spirit does not accept the things that come from the Spirit of God but considers them foolishness, and cannot understand them because they are discerned only through the Spirit. — 1 Corinthians 2:14 (NIV)

Bible Verses That Suggest Healing Is God’s Will For You