A retiring cop was brought to tears when his daughter helped give him the perfect send-off. 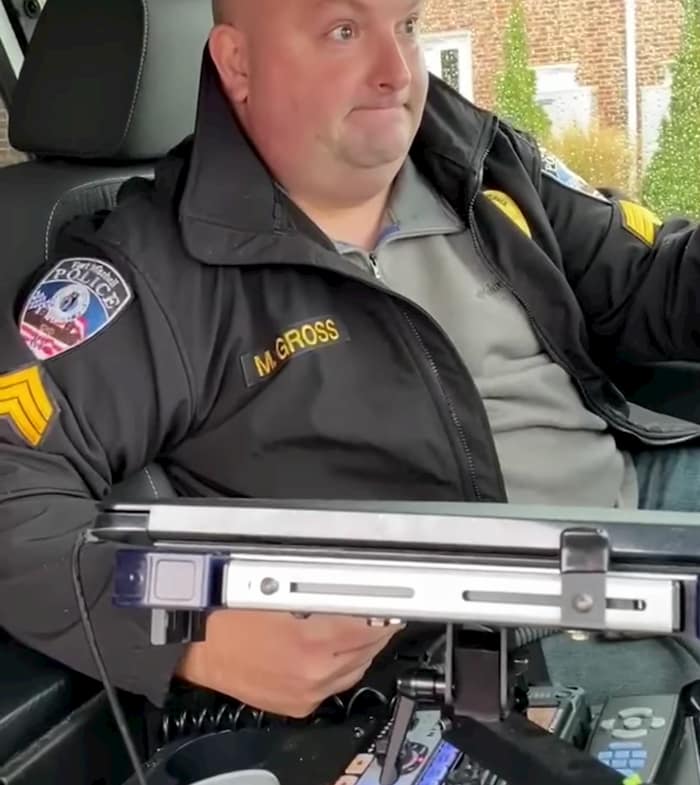 After spending a large part of his life to serve the community, the last day of work was a very emotional one for Mike Gross from the Fort Mitchell Police Department in Kentucky who retired on Nov. 30.

The Fort Mitchell Police Department shared a post saying, “Please join us in congratulating Sergeant Mike Gross who retires today after 20 years of service to the citizens of the Commonwealth of Kentucky,” they wrote on Monday.

“In 2013 he joined the Campbell County Sheriff’s Department as a Sergeant in charge of operations. Sergeant Gross began working for the Fort Mitchell Police Department in 2015.”

In appreciation of his hard work, they wrote, “Among his many contributions to our department and community, Sgt. Gross helped modernize our evidence room, played an integral role in the launch and maintenance of our body-worn and cruiser cameras, and has been the creative force behind our department’s social media accounts.”

“He is also a regular supporter of young entrepreneurs at their lemonade stands across the city. Congratulations and thank you Sgt. Gross.”

His wife Erin shared a clip of him radioing in, logging out and, thanking his brothers and sisters in the police force. He wished them all the best as they serve the country. On the other side of the radio was his daughter who made her dad emotional as she read her statement, Gross was teary-eyed and appeared to bite his lip.

Mikes final call after 20 years in law enforcement, and daughter Kylie Gross on the other side of the radio with his send off. 🖤💙🖤 #fatherdaughtercrimefightingduo

“He has served and inspired the community, and his brothers and sisters in blue are showing his passion for law enforcement in helping others through his work and through his daily life. Thank you for your 20 years of service. You have always been my hero and I love you to the moon and back daddy. Forth Mitchell eight, I show you off shift.”

Gross reacted by saying, “Oof, that was rough,” he laughed and said, “Aww… that was sweet.”

Erin wrote on Facebook, “Mikes final call after 20 years in law enforcement, and daughter Kylie Gross on the other side of the radio with his send-off.” Messages of congratulations poured in from other police departments and even reporters sent him their wishes. What a wonderful way to send-off one of Fort Mitchell Police Department’s finest men. Thankyou for your service Michael! So glad you are safe, your devotion to the citizens of your community were blessed to have you out there protecting them. May God richly bless you and your family for the rest of your days.

Wow.. Fort Mitchell is such an awesome town.. spent quite sometime there a few years back. How cool to see this and a chance to thank an awesome member of the blue. Thank you!