South African actress Thami Ngubeni is giving praise to God for saving her life after a robbery and kidnapping incident. 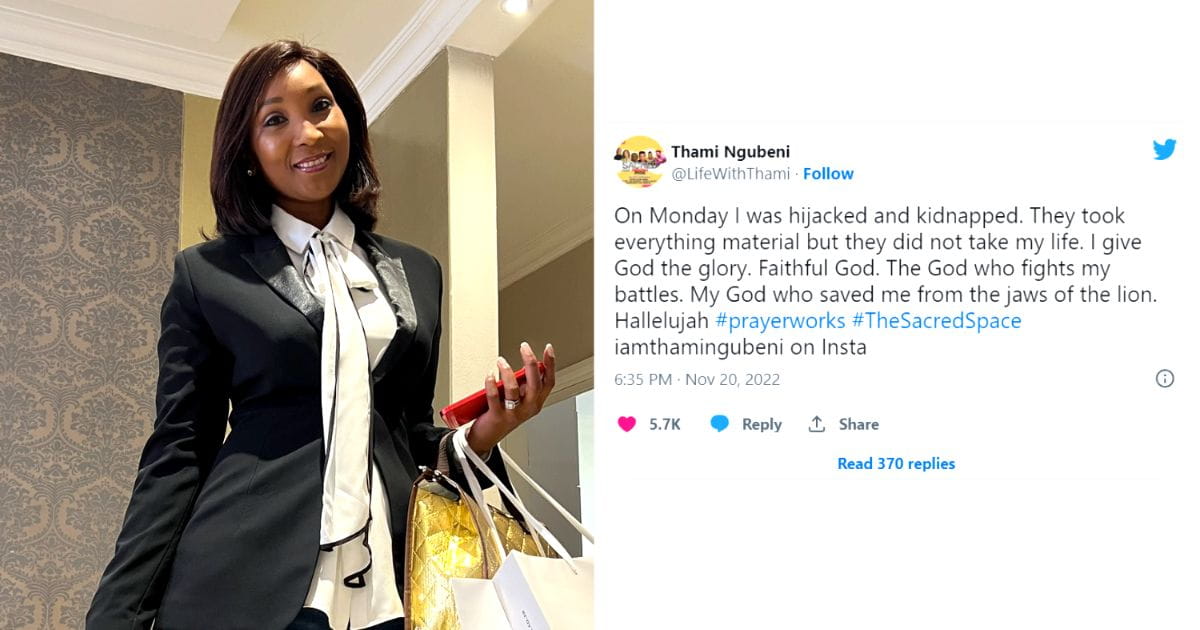 Earlier this month, she was hijacked and kidnapped by unknown assailants who robbed her off of everything material she had in her possession that day. However, her life was miraculously spared and now she is giving all the praise and glory to God for delivering her from death.

“On Monday I was hijacked and kidnapped. They took everything material but they did not take my life,” Thami Ngubeni Tweeted. “I give God the glory. Faithful God. The God who fights my battles. My God who saved me from the jaws of the lion. Hallelujah.”

On Monday I was hijacked and kidnapped. They took everything material but they did not take my life. I give God the glory. Faithful God. The God who fights my battles. My God who saved me from the jaws of the lion. Hallelujah #prayerworks #TheSacredSpace iamthamingubeni on Insta— Thami Ngubeni (@LifeWithThami) November 20, 2022

Fans and followers on the internet has poured in with support and positive comments, applauding her for sharing her testimony, calling her brave and praising God for saving her.

While some were thankful and shared the same sentiments of the actress. Some were still doubtful as to how she could be thankful after she had been robbed. Denying the fact that Thami’s safety was truly a blessing from God. Even so many others have come out to praise God together with the actress.

In a response to a fan who questioned her testimony. The actress responded with the following tweet; “I’m thanking God that He saved my life”. “That even though the enemy tried to harm me, God protected me. A weapon formed against me but it didn’t prosper. I walked through the fire but was not burned! Praise be to Jehovah. Hallelujah.”

Such kidnapping and robbery incidents are not uncommon in South Africa and there has been a recent developments where celebrities are being targeted.

Together with the actress, we give thanks to God and His angels for protecting her and delivering her from a possible loss of life.