When newborn baby Augie, did not pass his first hearing test, his mom Christin Lang wasn’t concerned since babies fail their first screenings.

A big day in our journey. Will post a video in just a bit!

She said, she did not worry too much about it, as her middle son too didn’t pass his hearing screening the first time.

But on further testing, the doctor gave her some unexpected news.

She said, that after a few hours, she knew it wasn’t going as expected. She got the news that baby Augie had bilateral, sensorineural profound hearing loss.

Lang was in shock because she never expected Augie would be deaf. She said, “I cried because in that moment I realized that all of the ‘I love you’s’ that I had whispered in his ear since the moment I met him [were] void,” Lang said. “He hadn’t heard any of them.”

The days after were very hectic for them all, as it was spent on doctor visits, research and learning American Sign Language.

Lang said, she never imagined their first year would be like that, with doctor visits, specialists and tests.

When the time came for Augie to test hearing aids, his mother wasn’t hopeful, she had already enrolled him in Happy Hands, a school for deaf children in Tulsa, Oklahoma, dedicated to teaching sign language.

She never believed Augie, would ever be able to hear again.

But when doctors fitted Augie with the hearing aids, Lang got the biggest shock of her life.

“The moment they turned the hearing aids on, he immediately started laughing. It was amazing and I was crying during all of it,” Lang said. 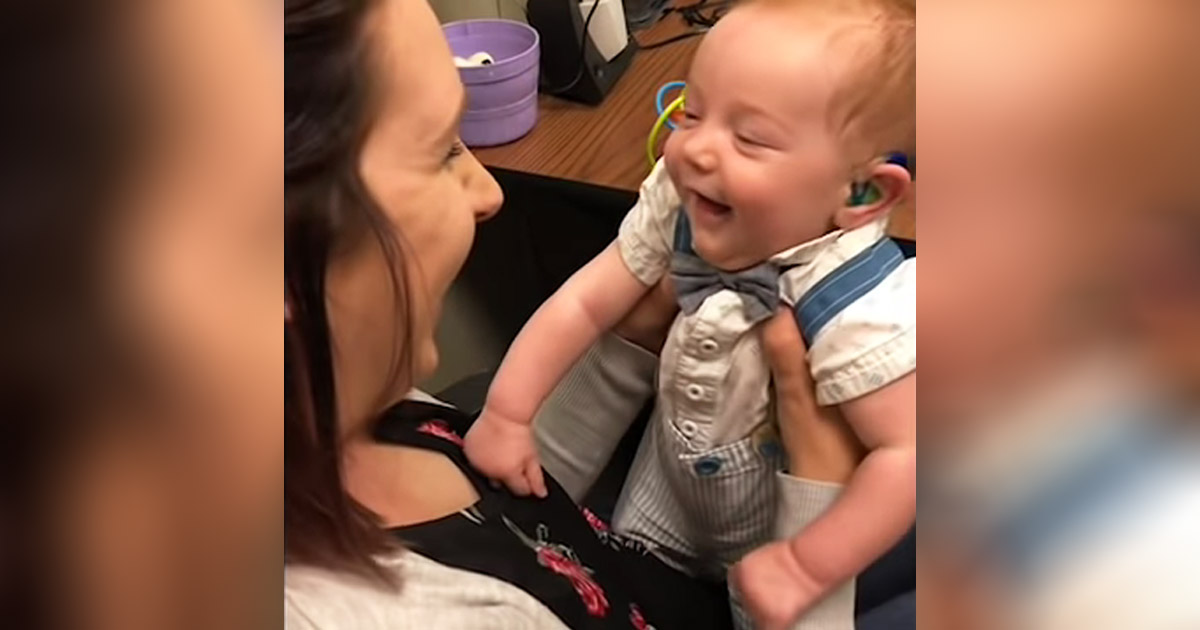 The video shows Augie smiling and giggling, when he heard his mothers’ voice for the first time. Lang’d dreams had come true.

“You can’t tell in the video but my face was covered in tears. Tears of joy because once I found out Augie was deaf, I grieved knowing he would probably never hear my voice,” Lang said.

She said it was her greatest desire that one day Augie would be able to hear his mother’s voice.

“Those moments are moments I dreamed of and desired and really did not have much hope that I would ever get to experience and share with him. God gave us me those moments and I am so thankful He did.”

Now Lang is looking forward to learn more about ASL and the deaf community as she raises her beloved son.

Even though Augie can’t hear his mother without hearing aids, she knows nothing will stop him from achieving whatever he desires to.

Lang said, she hopes to continue learning ASL with Augie because she will do whatever required to communicate with her baby.

What determination and resolve this mother has for her baby, our prayers go out for complete healing for baby Augie.