A grieving 5-year-old girl whose cat had just died and to whom she had written a letter to, received a fitting reply from a kind-hearted postman.

Letter to cat in heaven 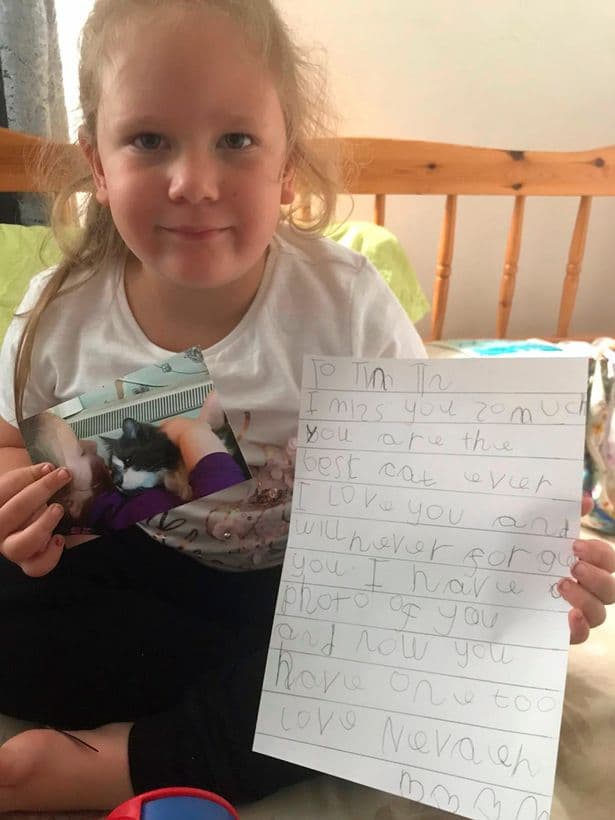 Nevaeh wrote a letter to her cat Tin Tin in heaven and a postman at the Royal Mail spotted it and took the time and effort to send a parcel and letter in reply to the distraught little girl. Five-year-old Nevaeh Lowe from Walton-on-Thames lost her beloved pet cat and best friend Tin Tin who had to be put down. She was worried the cat would be alone and wrote her a letter to check if she was okay, with the address as heaven. 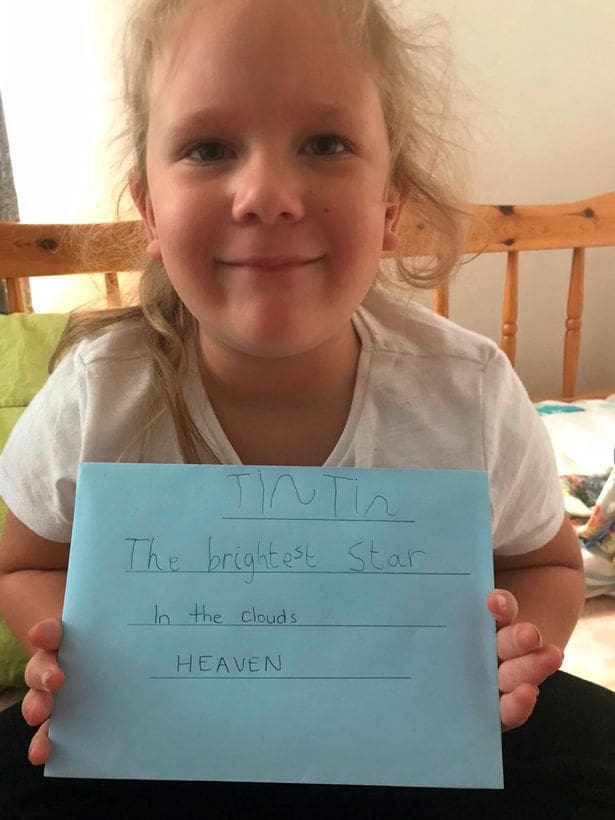 She was warned by her mother, Tamara, 26, who told her that heaven might be too far away, but Nevaeh insisted and they put the letter in a postbox. Soon they received a parcel in the post a week later from a postman at Royal Mail who saw the letter and replied.

The kindhearted postman wrote Nevaeh a message from Tin Tin, telling her why she had to go to heaven and that Nevaeh didn’t need to worry about her. He also gifted her a toy cat that looked just like Tin Tin and a book to read with her mum whenever she missed her.

Parcel in the mail

Her mother told her cat had transformed into a star and the letter she received back said that whenever she looked up at the sky, the brightest star would be Tin Tin “there to listen”. It said: “I want you to know that I’m OK and have made some nice friends here, one of them called Tibbles snores so loud when we have cat naps.

The letter read, “I’m being fed and looked after well by the angels. I know you are sad that I’m not there with you but please don’t be. In here is a little cuddle cat that I thought looks a little like me. So if you do feel sad you can cuddle him like how we used to.” 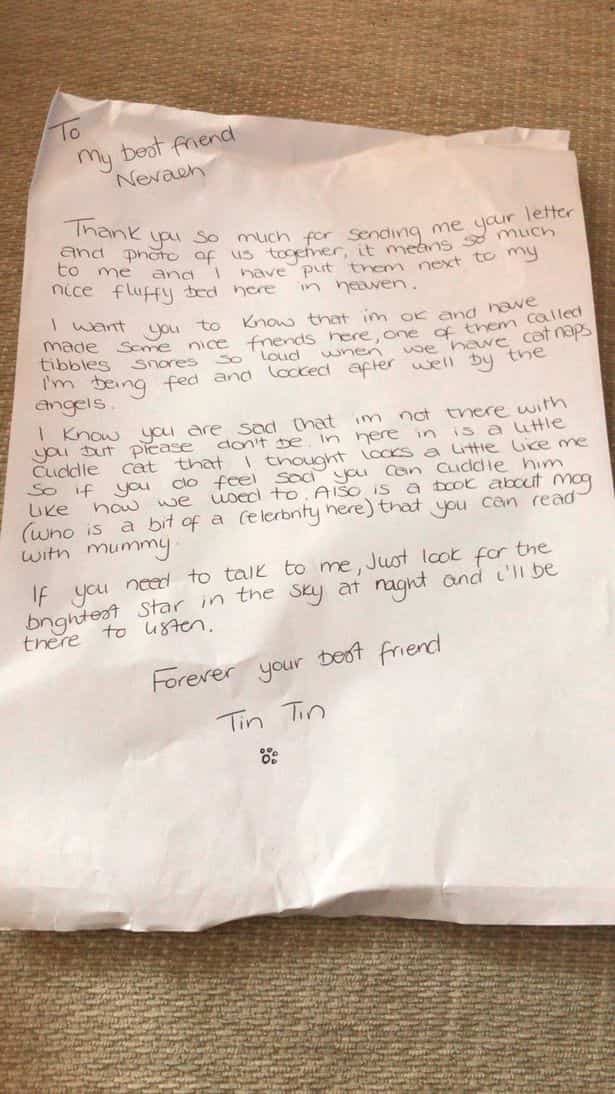 It ended: “Forever your best friend, Tin Tin,” and a paw mark. Teaching assistant Tamara said: “I was gobsmacked when the parcel arrived, it was so moving to open it with Nevaeh. “I think she really needed some closure so she could start to move on after Tin Tin, and what this postman has done really did that for us. Nevaeh and Tin Tin were best friends, they had a really close bond, whenever they saw each other they were so happy.”

Tamara said, “When we sent the letter I didn’t expect anything to come back and I don’t think Nevaeh did either but it was important to her to say farewell. Getting a response was the last thing we expected, and I’m just so thankful to the Royal Mail and the postman for writing that letter and sending it to us – and of course for the toys too.”

She added, “I tracked down the postman that did it and although I didn’t get a chance to speak to him, I did speak to his wife, and they have cats too so totally understood why Neveah was so upset. It has really helped, her sleeping is getting back to normal and now that she knows Tin Tin is OK she is starting to get over the loss and be a bit happier.”

Tin Tin had to be put down due to heart failure earlier this year and Nevaeh, who was struggling to sleep, eventually decided she needed to say a proper goodbye. “Since the letter came back she has been so much happier,” said her mum. “She really needed one final goodbye, and to know that Tin Tin was ok without her and being there to look after her. “Every night now she looks up and says goodnight, and knows that Tin Tin is looking back at her – and that lets her know she can head to sleep.” 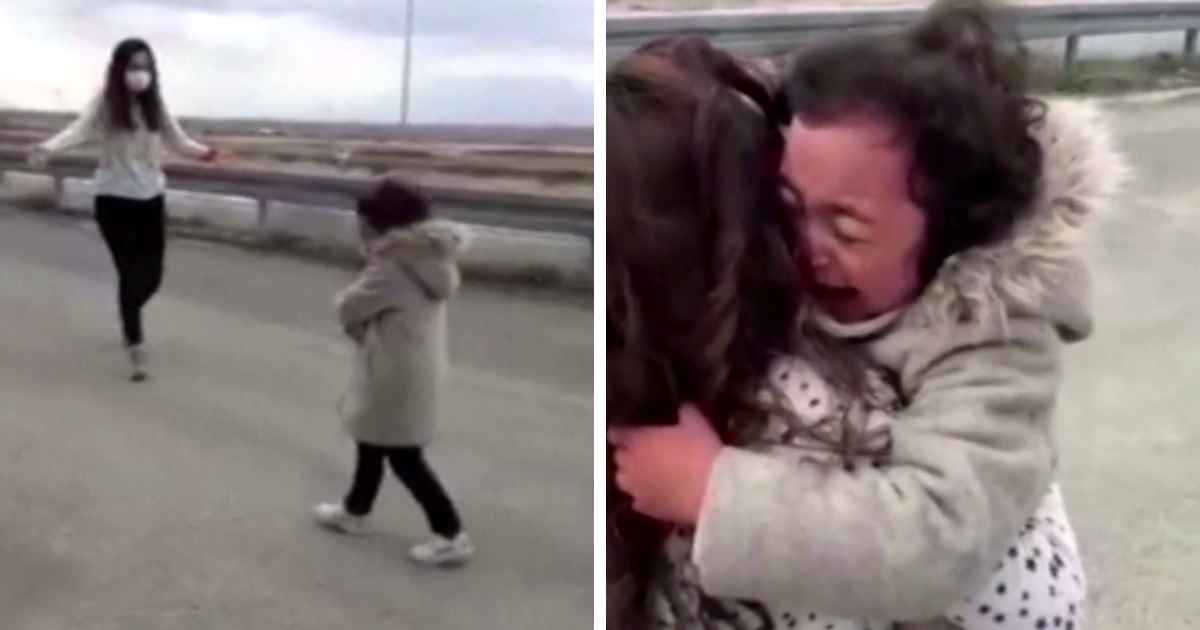 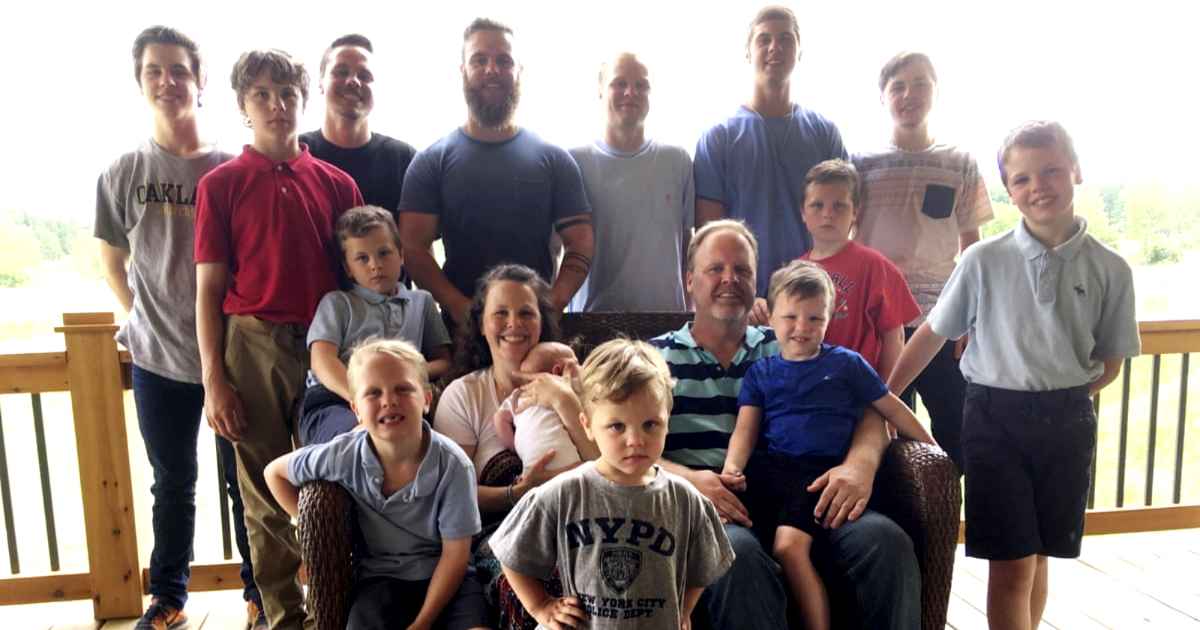 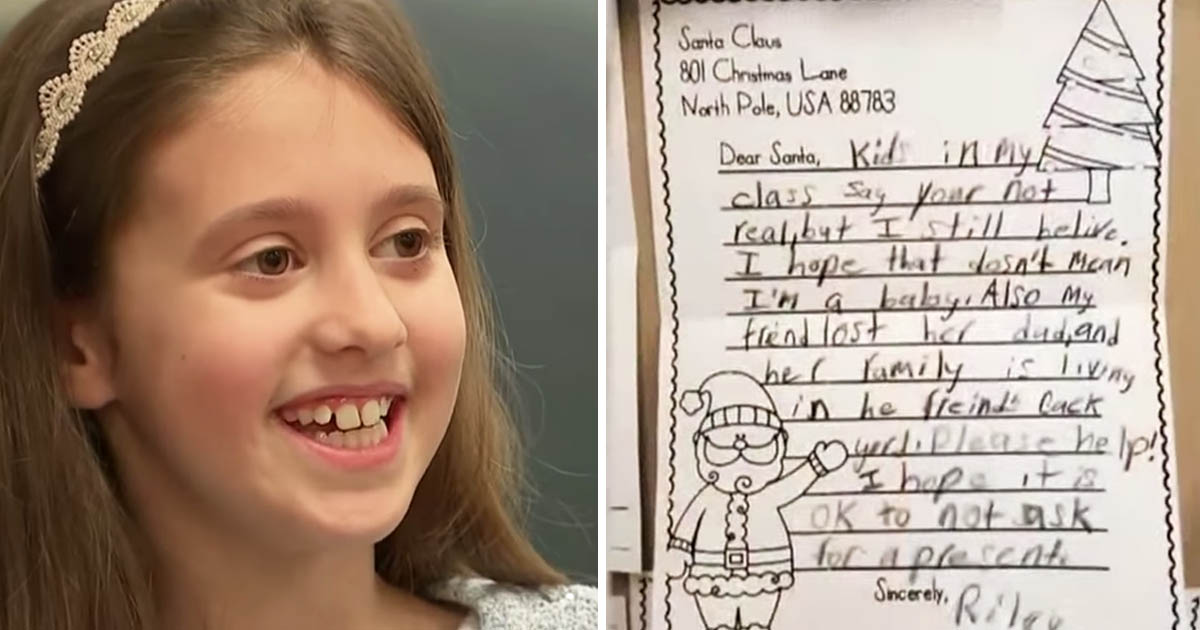 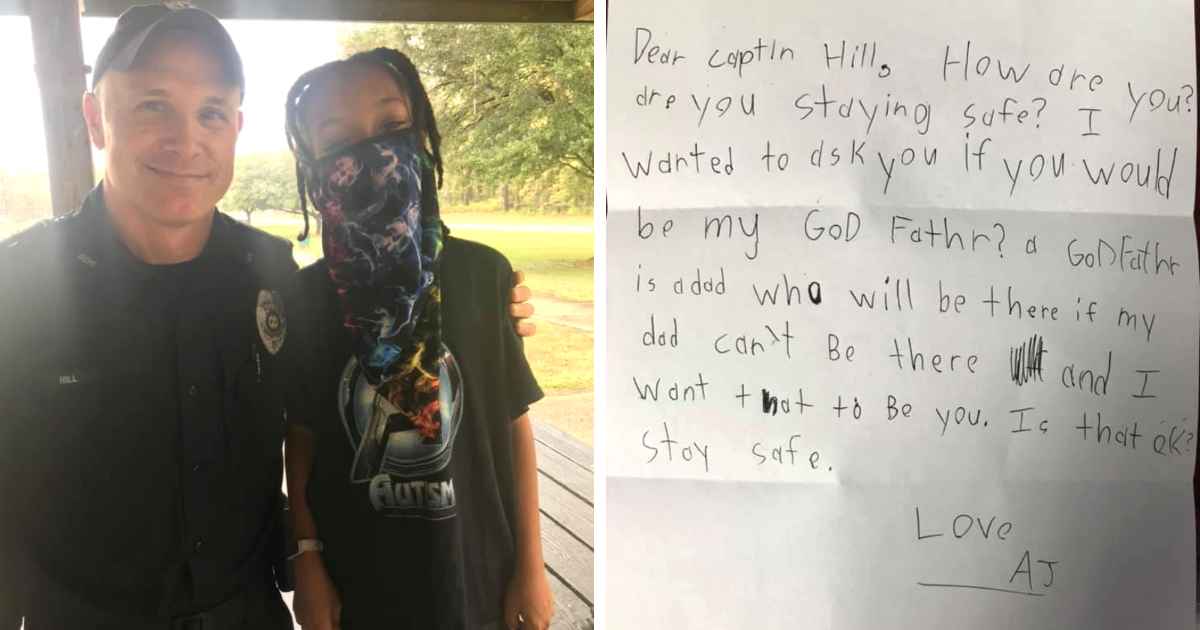 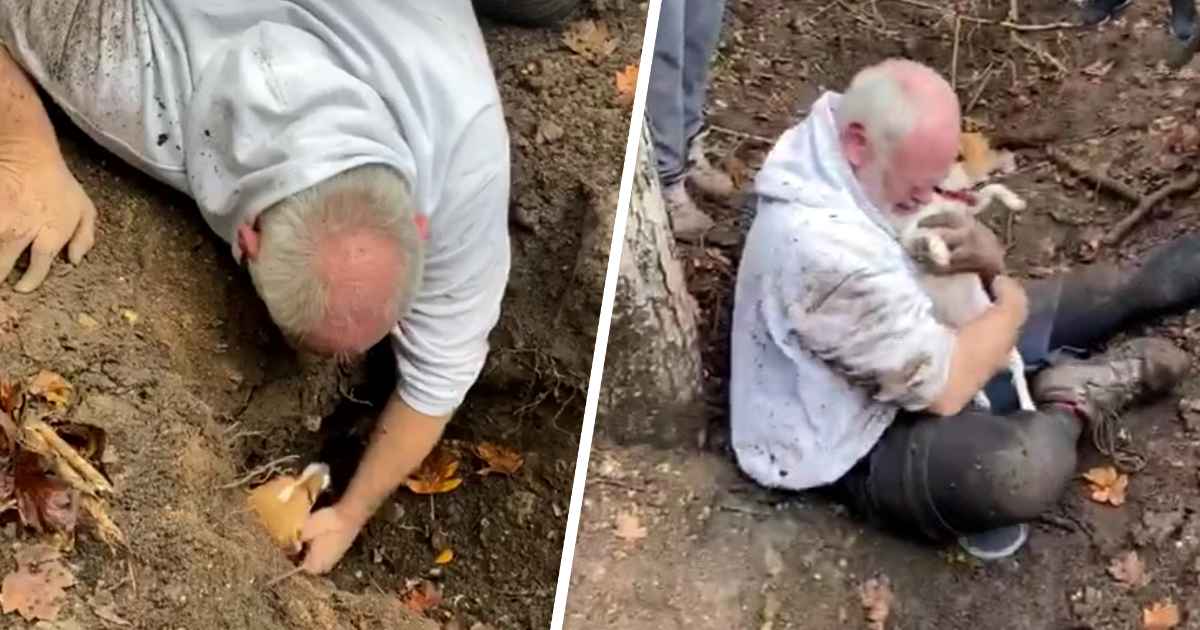